Sometimes guys want to get down with you on your first date because they are attracted to you or love you at first sight, but the main problem is knowing how to keep him interested after sleeping with him and getting him interested in you after the first physical intimacy or the second. Many guys see intimacy as their love language, and as such, no matter who the lady is, the only way she can prove to them that she is interested is by sleeping with them, so how do you keep a man after that hot physical activity? 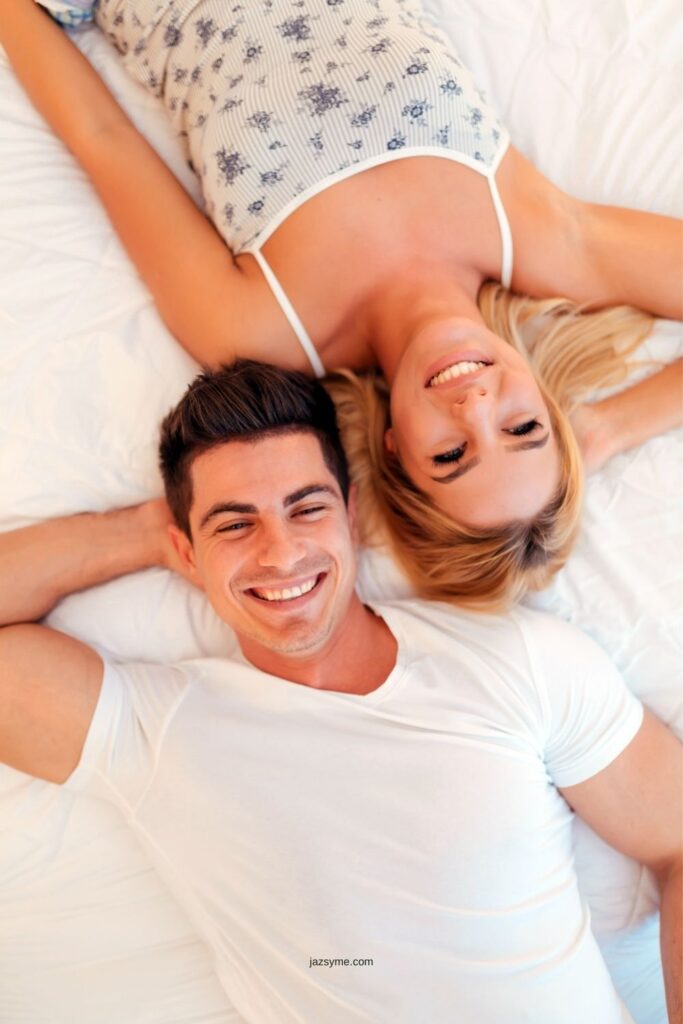 Here are few things you can do to keep him interested after sleeping with him; 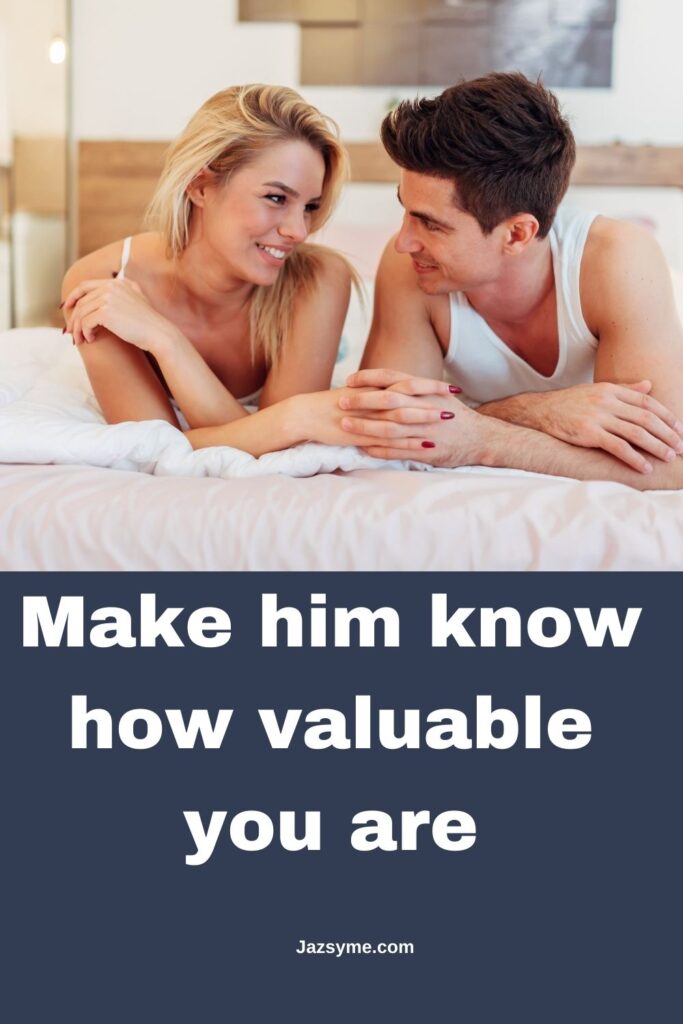 Many guys still leave ladies after sleeping with them because many of these ladies prove to them that they have nothing to offer after intercourse. The only thing they have to give to a guy in this era is their body, and this is one thing that turns off guys.

If it’s a serious-minded guy, then he will desire more than your body but what you can bring to the table. Know what he wants in a woman he will like to be with and know how to possess all he wants and, if not all, measure beyond average. 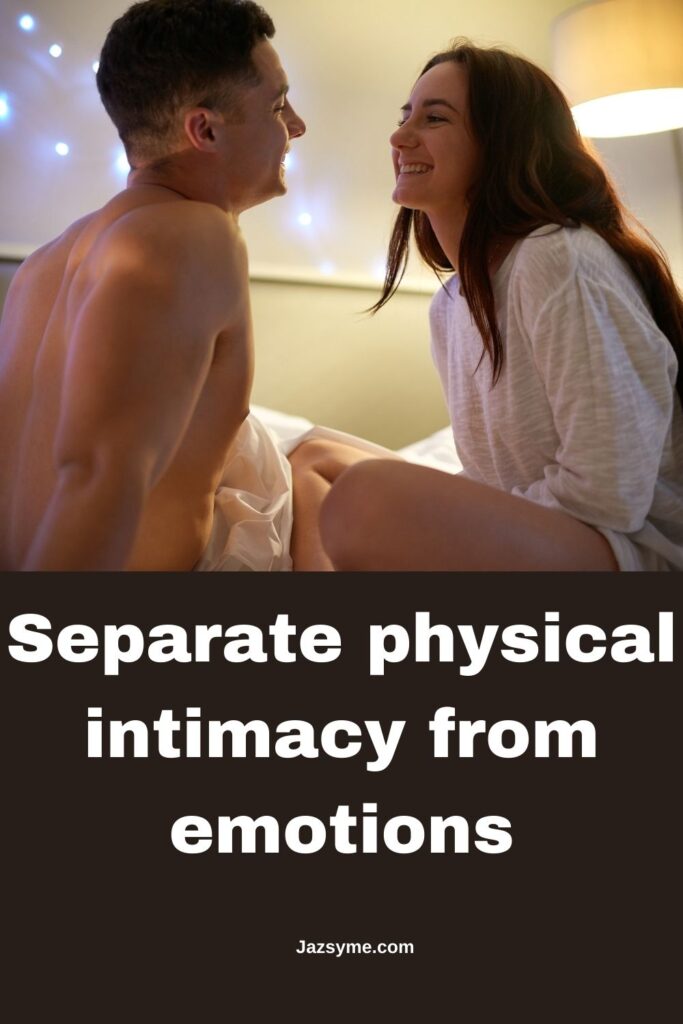 You need to understand that just a small number of guys can relate love with bonking. Most of them don’t see anything special in sleeping with a woman. You don’t have to be too emotional about it. Once it has happened, maintain a positive attitude and be ready to add value to him and not all clingy and wanting his attention all the time. He owes you nothing because he sees intimacy as just an act of pleasure. Get it and move on.

To keep him interested after sleeping with him, you don’t have to mention how he slept with you whenever you are in a conversation. Just be intentional and intelligent with your discussion. Let him know it is not just about physical intercourse that you both have together. It is beyond one-night stands.

Everyone gets the fact that being a woman means being emotional and also that once a man sleeps with you, you are emotionally attached to him. Still, you must understand that in this digital age, it is a different notion entirely. The fact that a guy sleeps with you doesn’t automatically make you his wife. It is a turn-off for most guys.

Let him know you also have your life to live, and it is not entirely about a man. Get busy with your life and be a bit challenging. Let him chase you as well without any fear of losing him. Guys want their ego massaged and, as such, often love to chase something and get it. It’s proof that you have value. Avoid being too available and at his reach. 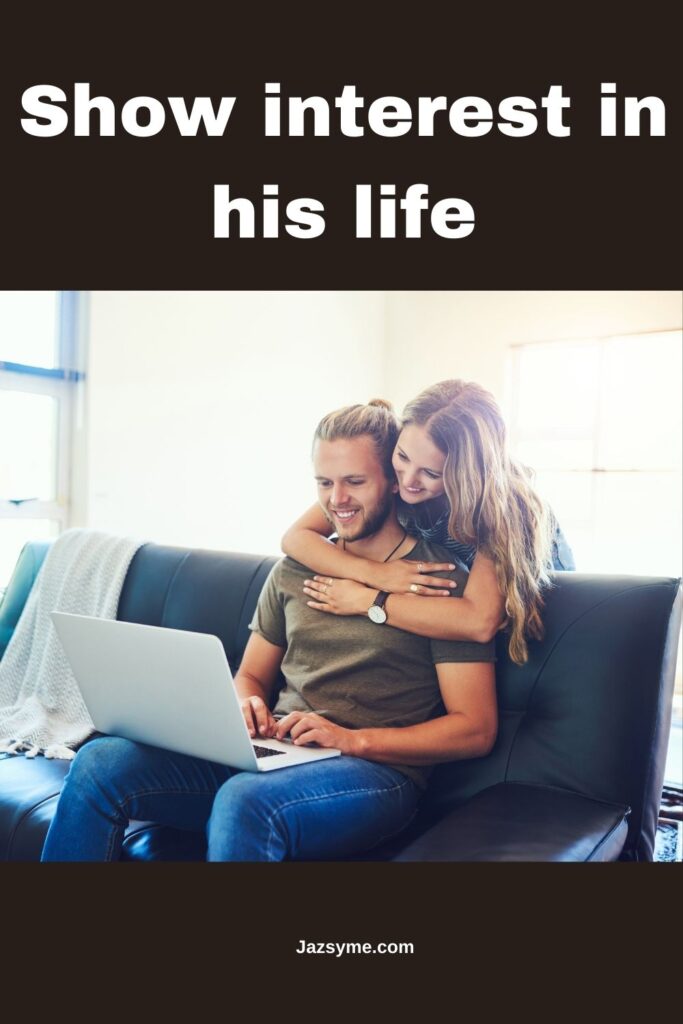 Show him that you care beyond the rumpy-pumpy you had with him through your actions and words. Set him up with intelligent conversations and leave him to unravel some puzzles. Ask him questions about his job, his new projects, business trips, and have fun around him. Sometimes between conversations, pause and let him know how you usually enjoy every moment with him and how you love him. It is proof that you are intentional about the relationship, and it’s not just because he slept with you that is why you are sticking around him.

Sometimes if he’s going on business trips, ask him if you could go with him to keep his company jokingly, and if he enjoys your company, he will indeed allow you to go with him. That is how to get a man interested in you after sleeping with you. 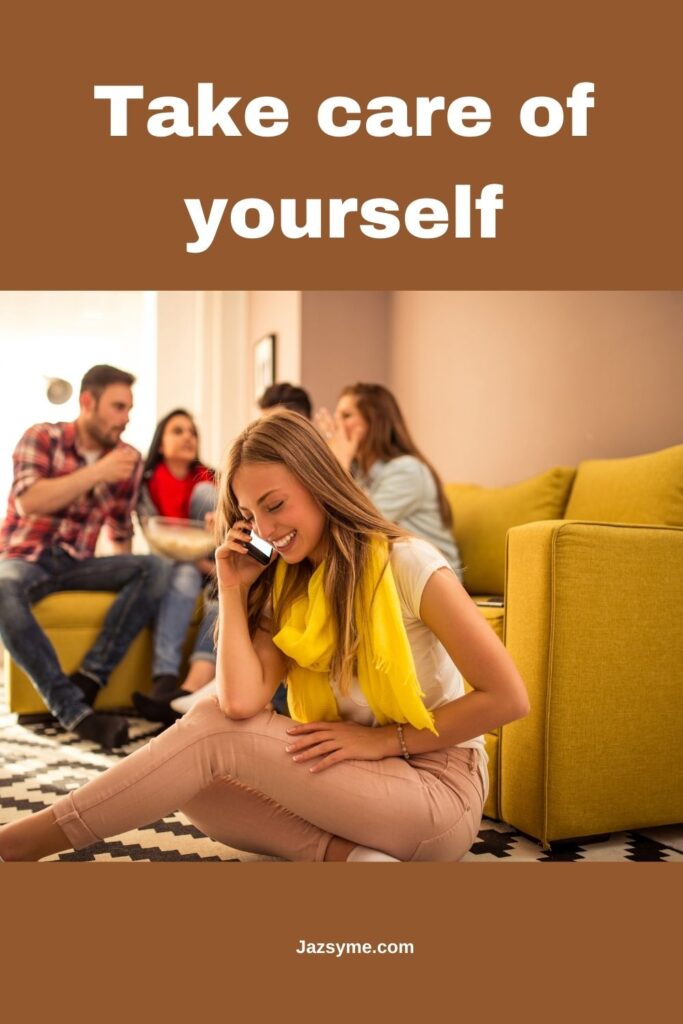 Ensure you take care of yourself and appear irresistible before him. Please don’t give him the impression that your life now revolves around him because he slept with you. It’s a very wrong thing to do, and no man wants such a woman around him.

Sometimes out of the fear of “what if he leaves me for another woman,” ladies keep chasing a man around after sleeping with him. They send texts morning, afternoon, and night to stay in interest. The truth is you are sending him farther away. You need to understand that he also has his life to live, and his life doesn’t revolve around you alone. You are not yet his wife.

Don’t choke him with your attitude and actions just because you are insecure. Give him a chance and let him decide if he wants you or not, and the best thing you can do is to give him a breathing space.

Many ladies don’t know how to communicate a man’s love language except to have intimacy with him. Sometimes a guy might love gifts, hangouts, the act of service, or conversation. Study him within the few weeks or months you have spent with him and communicate this language as often as possible to keep him interested in you after sleeping with him. But you should understand this is not to force him to love you or be interested in you, and you should do it with sincerity. Guys know when you are fake things and pretend, and they hate pretense or fakeness.

Anytime you have a chance to support him, do it with happiness and let him know it’s a pleasure to do that for him. Every man wants a supportive woman and not a dependent one with an entitlement mentality, always wanting but not giving. Keeping a man interested in you beyond making love demands sacrifices.

When I was single, I was already preparing my mind to learn different things my man showed interest in.

It would be best if you learned to do that as well. Know what interests your man and show interest in it as well. Sometimes initiate a conversation on that topic and keep him engaged. If he loves to watch football, you can watch with him once in a while to create a bond between you two and keep him interested in you, and once you show interest, he can even invite you to watch the game with him. 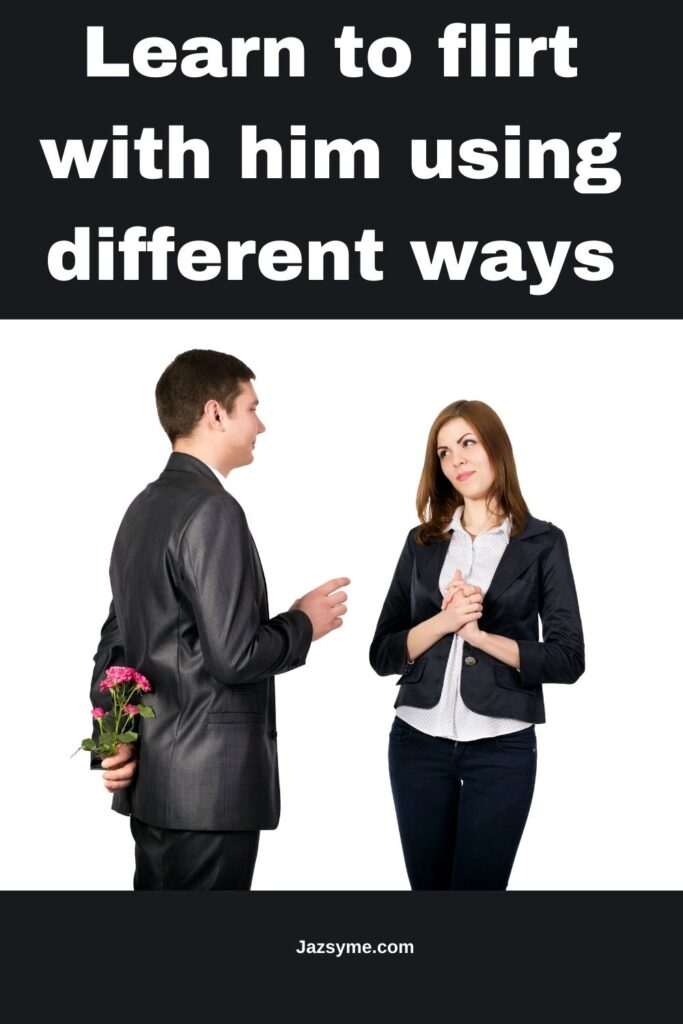 With the invention of different social media platforms, communication has become an easy thing to do. Just once in a while, drop texts or messages in his inbox online, love messages expressing how you feel about him and what you love about him. Be cheerful and humorous in your conversation.

One of the mistakes most ladies make is acting as if they are now in control because he has slept with you. The more you act this way, the more you keep chasing men away from you. Being too serious about the whole relationship thing is not the way to keep a man. Spice it up sometimes by chipping in some things like text messages and make them short. Make him feel appreciated and confident in himself.

Finally, you must understand that physical intimacy with men is more like having pleasure and not a way of showing their depth of love to you, if you don’t want the bonking, then you don’t have to sleep with him, but if you both agreed to do that, then you should find a way to keep him interested. Men were created that way, and you can’t keep working up yourself because he slept with you; not all men see women as toys; many still sustain that interest and love you. 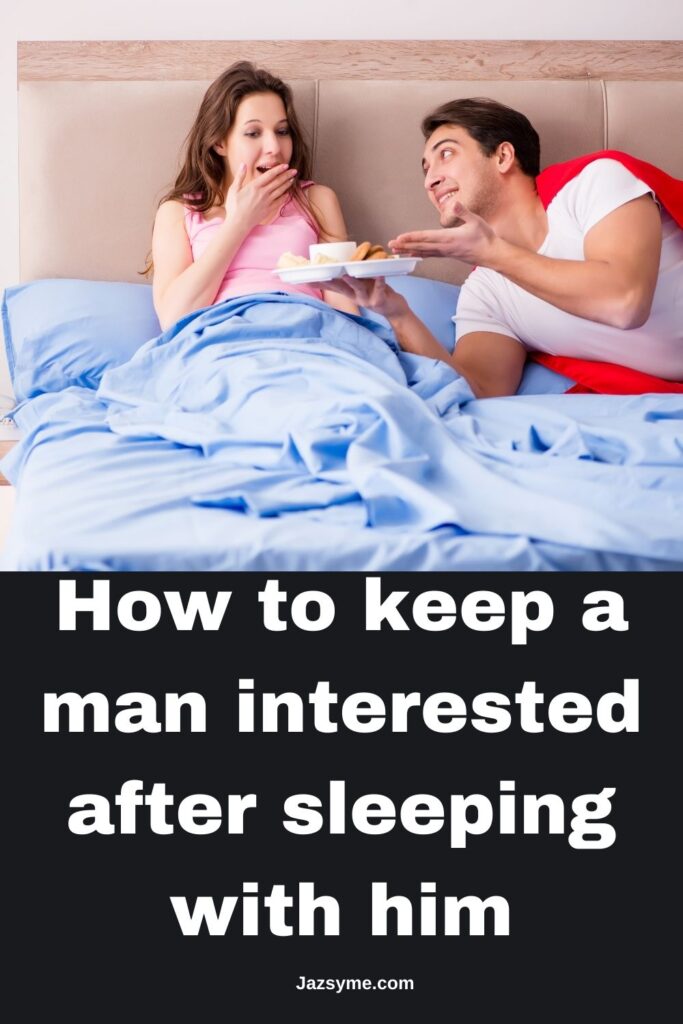 It would also be best if you kept investing in the relationship to keep him interested after sleeping with him to ensure his mind is still with you, but this is not to say that his mind is not with you after sleeping with you. Please don’t take it too personally, even though you know your value and worth. Relax and keep the situation under control by applying these tips.

Please don’t take it too seriously by being clingy and seeking attention, be yourself, and be free around him. Take care of yourself and avoid that entitlement mentality just because he slept with you. There is no golden rule that sleeping with a man makes him your husband. There might be a better man out there who values you. 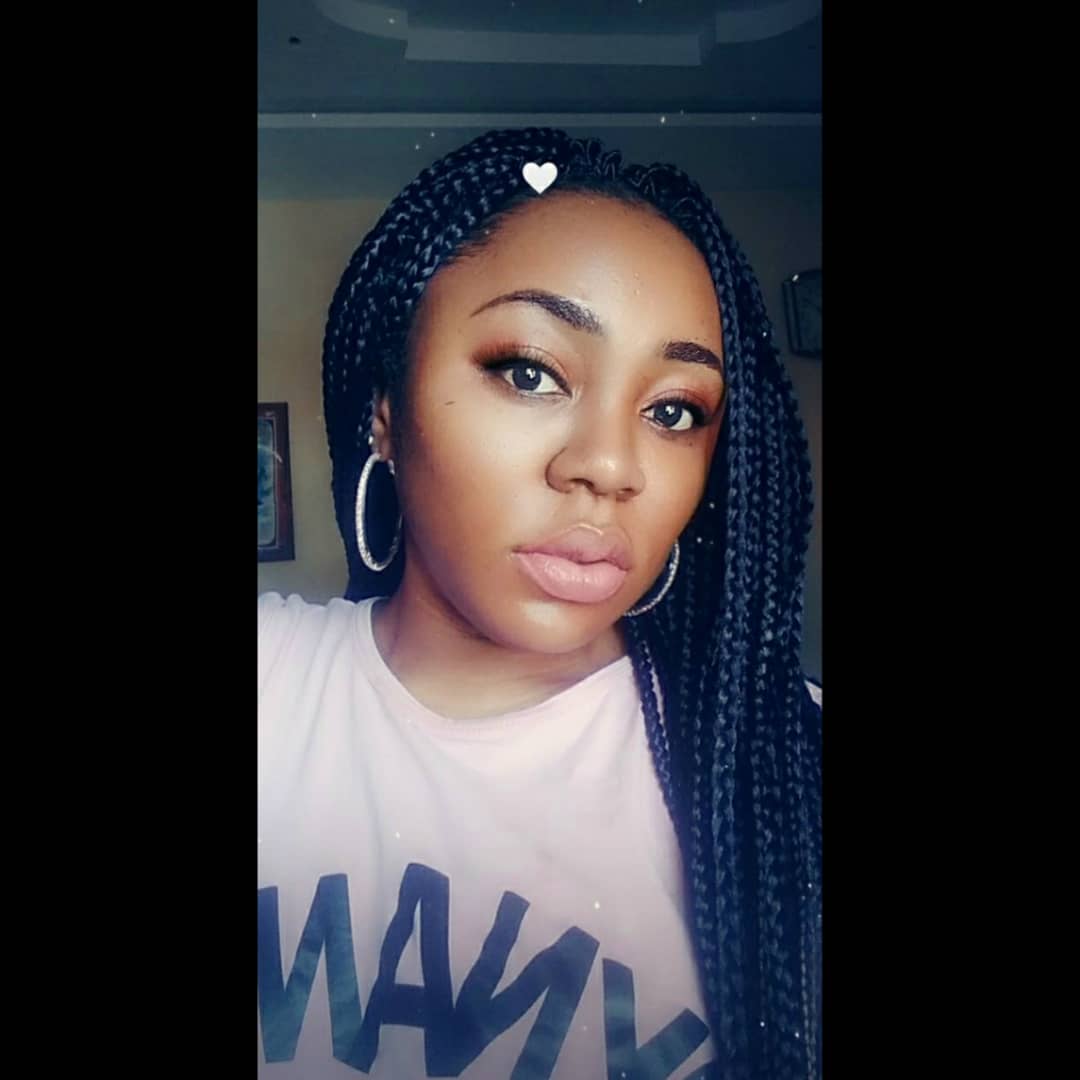 Hello! My name is jazmine and i welcome you to my blog. I am a work-at-home copywriter, author and mom  who decided to start blogging because I truly enjoy writing. I created jazsyme.com as a way to connect with people, exchange tips, relationship advice and share stories.
END_OF_DOCUMENT_TOKEN_TO_BE_REPLACED

This error message is only visible to WordPress admins

There has been a problem with your Instagram Feed.